It was 65 years ago today that Dodgers President Walter O’Malley stood at home plate to open the newly constructed, 5,000-seat stadium at Dodgertown, named for local businessman and Airport Director Bud Holman.

Holman Stadium opened to great fanfare and celebration. An overflow crowd of 5,532 filled the stands at Holman Stadium for the opening ceremony honoring the man responsible for bringing the Dodgers to Vero Beach.

Ironically, at that time the ballpark had more seats than Vero Beach had residents!

Fast forward 65 years later, and fans still enter the gates, often walking past the replica Baseball Card Wall depicting the more than 140 Hall of Famers who have played and visited this iconic stadium and sports campus.

In this same year – 2018 - that Historic Dodgertown is celebrating its 70th anniversary, Holman Stadium is recognized today with what else? A baseball game of course. Historic Dodgertown’s annual Spring Training Invitational for college and high school baseball, softball and lacrosse is in full swing.

It was in 1947 that the Dodgers were looking for a training site to hold future Spring Training camps. That year their camp was held in Havana, Cuba, a long way from Brooklyn, but team President Branch Rickey strategically wanted to keep his “great experiment” of breaking baseball’s color barrier with Jackie Robinson under wraps for as long and as quietly as possible. Racial discrimination was less prevalent in Havana, but it was time to move the team back to the United States for training.

Bud Holman learned of the Dodgers search for an expansive property and invited executives to take a look at the vacated U.S. Naval Air Station, closed following World War II. In 1948, Dodger Town – as the Vero Beach Press Journal reported in January 1948, was opened and was the first fully integrated Spring Training facility in the South.

In 1950 Walter O’Malley was named President of the team and in February 1952 he renegotiated the original four-year lease agreement with the City of Vero Beach for an additional 21 years. One month later he announced the Dodgers will build “a little 5,000 seat stadium” at Dodgertown in Vero Beach. The stadium’s purpose is to attract more major league teams to play the Dodgers in exhibition games.

On March 11, 1953 the famed Holman Stadium was dedicated, and the Dodgers played and defeated the Philadelphia Athletics that day, 4-2. Dodger pitcher Carl Erskine allowed just one run and four hits as the starter for the Dodgers, while center fielder Duke Snider drove in two runs in a three-run first inning for Brooklyn.

Watch video from Erskine of that first game by clicking here.

The 1:30 p.m. dedication ceremonies were carried live on the radio and included a concert by the Vero Beach School Band; Merrill P. Barber, the President of the Indian River County Citrus Bank as the emcee for the official festivities; and an invocation by Rev. Fr. Patrick D. O’Brien, Pastor of St. Helen’s Catholic Church in Vero. Distinguished guests included Florida Secretary of State Robert A. Gray, representing long-time Governor Daniel McCarty, who had suffered a disabling heart attack only two weeks prior, politicians from Vero, Ft. Pierce and Stuart, the Commissioner of Baseball Ford C. Frick, the President of the National League Warren C. Giles and the President of the American League William Harridge.

As noted in the attached photograph, the A’s President, the great Connie Mack, also attended the game.

Fifty Royal Palm trees, given as a gift from Dodger part-owner Mary Louise Smith, were placed around the perimeter of Holman Stadium, adding a unique touch and hallmark for the stadium. The Royal Palm trees remained until the Christmas freeze of 1989. A plaque describing the gift of Royal Palms by Mrs. Smith is still at Historic Dodgertown on the walkway between the press box and third base.

In the process of building Holman Stadium, O’Malley designed a heart-shaped lake (stocked with fish) to honor the love of his life, his wife, Kay. The lake was formed by excavation, which in turn formed the seating bowl and banks of Holman Stadium.

O’Malley made several key introductions and gave the dedication message and followed that with the unveiling of a plaque for the stadium which read, “The Brooklyn Dodgers Dedicate Holman Stadium to Honor Bud L. Holman of the Friendly City of Vero Beach, Walter F. O’Malley, President, Emil H. Praeger, C.E., Designer, 1953.”

Praeger later was hired to design Dodger Stadium in Los Angeles. The two Dodger ballparks designed by Praeger with O’Malley’s oversight have withstood the test of time for engineering excellence and aesthetic design.

M.M. “Jack” Frost, Vice President of Eastern Air Lines, stood in for Captain Eddie Rickenbacker, President of Eastern Air Lines, and unveiled the plaque with O’Malley. Holman briefly responded to the honor and that was followed by a prayer from Rev. Ed Gabler of the Trinity Episcopal Church, flag raising ceremonies by the color guard from Felix Poppell Post, American Legion and the national anthem by the band.

Holman Stadium was later expanded to accommodate 6,500 seats. Since 2014 the annual Jackie Robinson Celebration Game is played every April 15 to honor Robinson and his contributions to baseball, sports and society. 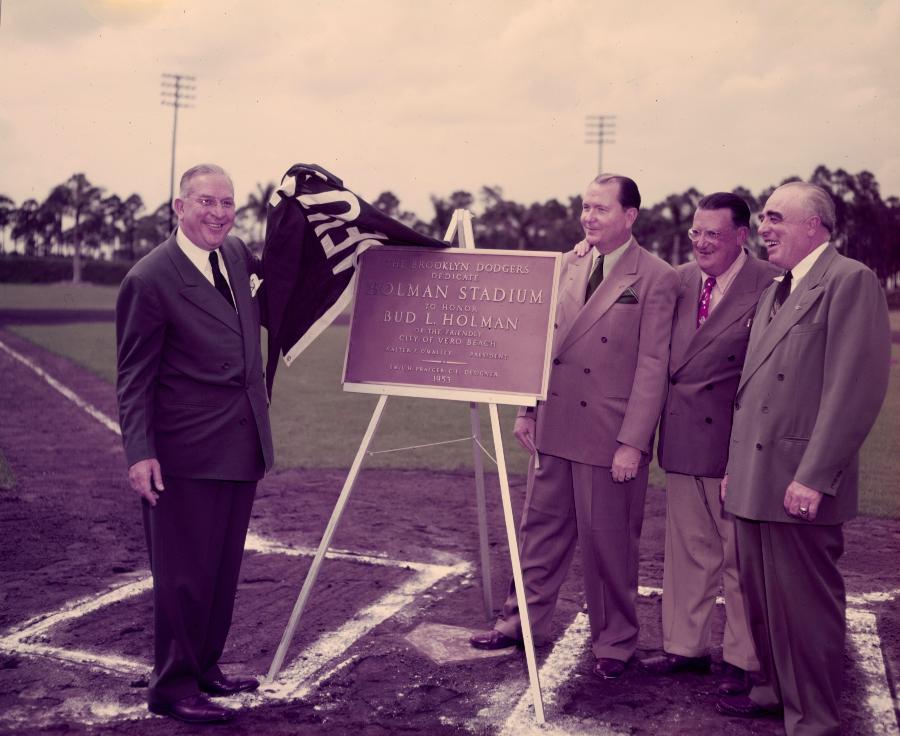